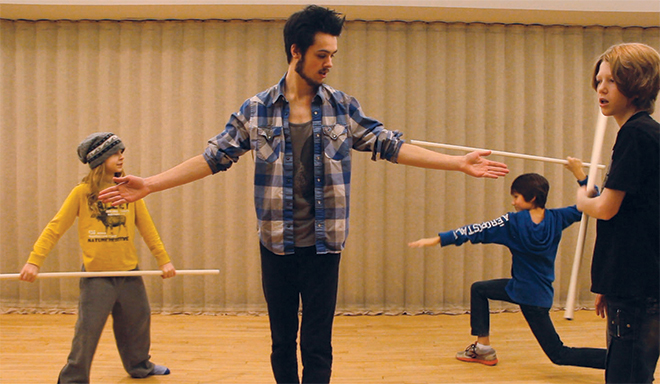 IR’s current SITC program works with youth from Winnipeg’s inner-city. The program is directed by Claire Friesen, and offers them free drama workshops that culminate in the production of a shortened version of one of Shakespeare’s plays. As well as instruction, food, bus tickets (or rides) to participants, and complimentary tickets to SIR productions are provided.

This program helps marginalized youth find their voice. It inspires them to dream, and to develop tools to express who they are as individuals. It is a powerful program that fosters empathy and expands horizons (as well as touching on many of the learning outcomes defined by the Winnipeg School Division’s English and Literacy curricula).

The value of studying Shakespeare lies in his masterful portrayal of the enormous paradox of the human condition. He shows people dogged by fate, destined for hardship, while offering up no easy answer. Despite hitting a very personal chord, participants bravely tackle these prickly themes. 2015 saw this culminate in a moving production of Romeo & Juliet.

This past year SIR AD Andrew Cecon and myself approached MTS Stories From Home about making a documentary on our youth and community Shakespeare in the City (SITC) program, and their quest to put on a production of Romeo & Juliet. As luck would have it, SIR Board Member Marilyn Firth was also directing R & J with her troupe the SuchStuff Players, a successful Winnipeg theatre company run by a community of home-schooling families.

Our documentary, entitled Both Alike in Dignity, chronicles the parallel productions of Romeo and Juliet by two Winnipeg youth theatre companies, SITC and Such Stuff Players.

Both Alike in Dignity will air on MTS Stories from Home this coming year. We are proud of the documentary, and proud of all the students involved. Hopefully you’ll be able to watch the documentary and learn more about our Youth, Community and Education programming. Your support helps programs like this positively impact the lives of unlikely people, and for that we are eternally grateful.