Finding the Funny: an interview with Ron Pederson

Q: Ron, you’re a celebrated comedy man, from sketches on TV to improv to musicals…you have comedy in your bones. Can a text like Shakespeare’s still be funny, really funny, 4 centuries later?

A: Shakespeare is funny in so many different ways; in a way, he was an improviser, using everything in his arsenal to keep those big plays full of variety and surprise. And there are things in it that are situational and hilarious, as in the Merry Wives of Windsor, where he sets up these situations that I think still resonate: a husband in hiding from his wife, mistaken identities; those things are still being used on television and Netflix. So ultimately yes, I think he is funny. But he’s also funny in a lot of linguistic ways, with his malapropisms and inventive words and expressions that can really date over time, which can be challenging. It’s cliché to say this, but there’s something for everybody in Shakespeare. The clowns in Shakespeare are really difficult and challenging because of those old jokes, and to lift them off the page now can sometimes feel like ‘oh God here comes that 400 year old joke, here we go’. I ran into that playing Launcelot Gobbo. And on top of that, some of those jokes are just plain racist. So, the long answer is: it all really depends on who’s directing the show, and who’s acting. I think Shakespeare is funny, but it takes dedicated artists to really figure things out. You really have to know why it was funny in the first place, and you need to know what a modern audience would be hearing now. There’s a science to it.

Q: What’s harder to do, a Shakespearean tragedy or comedy? Why?

A: Comedies are harder – whether it’s by Shakespeare or not. Comedies in general are much harder. You have to know why something is funny beforehand; you have to have a specific relationship with the audience with a lot of these comedies, and that’s where those clowns can be made or broken. There’s a science involved in comedy–not just a heart and emotion. You actually have to really consider the music of the comedy, where punchline lands, where the audience should laugh; you must consider things much more carefully–as opposed to just surrendering to it and going with your feelings.

Q: What’s your biggest pet peeve with contemporary trends in staging Shakespeare, and in particular the comedies?

A: I find that every play by Shakespeare has comedy in them, even the tragedies, otherwise it would be unbearable. Even Romeo and Juliet has a lot of comedy in it – it’s all very playful. And you have to find the playfulness inside of it all. I think that if Romeo and Juliet don’t laugh together, or at least recognize that they’re playing and playing with words, they will never fall in love. You cannot fall in love without laughing. So having to recognize the comedy, the humour, is important. I think my pet peeve is “serious directors” deciding that they know these plays, and that these are ‘serious plays’ and they must ‘be serious’ throughout…that kills the variety and the surprises, which can often cleanse our palate in a tragedy, and make them even more resonant. So yes, the dismissal of the comedy, or just under-cutting the comedy is a pet peeve of mine.

Q: What’s your favourite bit or line or joke from a Shakespearean comedy? What’s the best of his comedies, and the worst one…and why?

A: What comes to mind immediately and always makes me laugh is the play within a play in Midsummer Night’s Dream. I think it’s so earned, and you get to know those clowns, you’re dear to those characters, and it’s just so brilliantly built in that play. It’s really my favourite comedy. I also love the Taming of the Shrew; I love Petruchio’s arc, the back and forth of the comedy between him and Kate, and the comedy bits between the suitors. I think if you get the Comedy of Errors right, it is one of the funniest things in all of Shakespeare. Those Dromios have given me some of the loudest laughs. The Merchant of Venice has to be the most challenging of the comedies, particularly today. Those clowns are so racist, and so cruel; it’s just really thorny, tricky stuff to finesse.

Q: The Player King is a new play that you wrote in just 9 months and are now directing for us…that’s an incredibly quick turnaround from first idea to staging for the public…what made you say Yes and what do you hope people take from the production?

A: Well, my background is in improv, and the golden rule there is to say YES, and to go with it. I also come from Edmonton, where I lived in the golden era of the Fringe Festival, where the spirit of the thing was ‘new-plays-thrown-up-let’s-see-how-this-works-go’. That’s in my DNA. And you, Rodrigo, your “GungHo-ness” and adventurous spirit, it’s all infectious, so let’s try it! I’m that kind of artist. And this idea of a lone actor in crisis, and how the story tumbled out of that and gained momentum…it was easy to say yes. Also, Shakespeare wrote very fast, he didn’t have time to wonder all that much, he was quick. Sometimes you just gotta get things done! This play has its own momentum, and an energy that I think will feed the piece; and I’d like the audience to walk away from it having been taken through a story supernaturally. I’m really looking forward to having an audience look at this thing, and to see you, Rodrigo, playing with them. I’m just excited to have a story in front of an audience again! 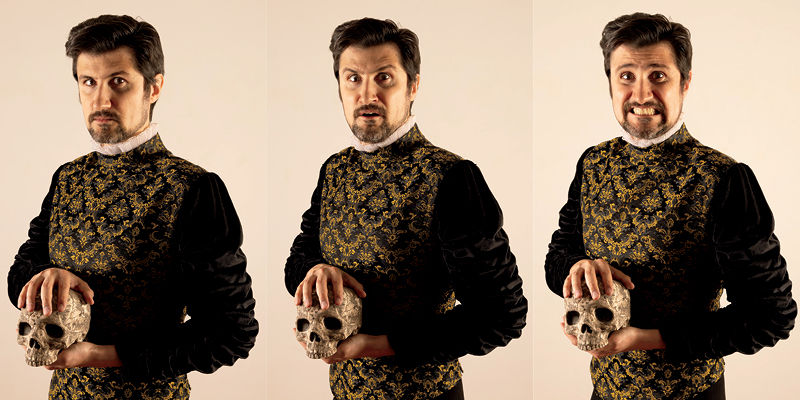